or at least try to anyway.

Any bmxer in Florida knows how difficult it is to train during the summer months. Between the 100º temperatures and relentless rain, it's a wonder that many of the top riders hail from the Sunshine State. I've often wondered why the NBL chose Labor Day weekend to host national championships, forcing Florida riders to train their hardest during the most miserable months of the year. One of William's top competitors lives in California, where the tracks stay dry, and the temperatures rarely exceed a balmy 79º.

National championships, or Grands in bmx speak, are now less than two months away. Our local track is a joke, and has been for quite some time, despite a promise of assistance from our parks and rec department. This, of course, is the primary training obstacle. 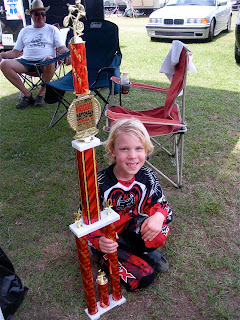 Saturday night we took the 90 minute jaunt to Circle City BMX in Dothan, AL to get in some serious ride time, and a local race. This facility has had their share of problems -- specifically the hush hush problem that all of you NBLers know about anyway. Well, I'm here to tell you, since their switch to the ABA, they have gotten their act together. This is in part to the support they receive from the city of Dothan. You see, unlike Tallahassee, Dothan parks and rec cares not only about baseball, but BMX too! Wow! So, just like the numerous baseball fields across the city of Tallahassee remain LOCKED when not in use by various sanctioned leagues, the ABA sanctioned BMX track in Dothan remains covered, with the gates LOCKED except during specific practice and race times. Then, and only then, are riders with American Bicycle Association memberships permitted to ride. In addition to this, the city of Dothan offered up $1000 to the BMX organization who brought the most riders to the Wiregrass Nationals held there this past May. (Photo: Wyatt with his trophy at the Wiregrass Nats. Video: Wyatt winning his main at the Wiregrass Nats in Dothan.) Every time we're there I think this is how BMX in Tallahassee should be.
Bmx is unusual in that coaches are not readily available to provide a training plan and proper motivation. For the most part, this has to come from the parents. When a rider turns expert however, this becomes sort of like trying to help someone with their trigonometry homework when you've been out of school for 25 years. Last summer we were fortunate enough to arrange for William to work with former pro Bill Madden in Fort Walton. This year, the boys are getting a whiz bang week of training at Ohio Dreams Action Sports Camp. They leave in three weeks, and can hardly wait. Here at home their dad takes them sprinting 2-3 days a week. Aside from that, they jump on the trampoline, climb trees, play chase with our dog, and sweat until the sun goes down.
Michael Phelps had it easy. He had a pool.
BMX Mom
Posted by bmxmom at 8:35 AM