Early last fall on a moonlit morning, I carried Dixie out. She stumbled a few steps into the darkness, as best she could, and struggled through her business. I suddenly felt a swoosh very near my cheek, and saw the large shadow as it ascended with a soft "whooooooo". The predator seemed ethereal, searching for the old and weak, and I quickly thought-- Not today. Please don't take her today.


I had learned to wake up in the mornings and grab the mop and clorox before heading to the porch where Dixie spent her last months. A bacterial infection had gripped her stomach that September, and wouldn't let go. Nevertheless, I clung to the hope that she would be the first dog to live forever, prompting some strange new religion.

On the morning of Friday, November 13, 2009, I opened the porch doors and flipped on the lights. My heart sank. Dixie, trying to get to the door, with no one there to open it for her, had soiled the entire patio, finally collapsing in humiliation in her own mess. I left Vann in charge of waking the kids, making breakfast, and packing lunches, so I could carry Dixie out into the cold for an unavoidable bath. While she dried outside, I nuked the porch with clorox.

I watched Dixie carefully. I talked to her, wanting so badly for her to respond. I wanted her to answer the question for me. Are you ready? She was so tired, and I was too. I didn't want to let her go, but looking in her eyes, the answer was there. It was time.

Dixie was my first dog. Very young and very much in love, Vann and I added her to our happy home in November of 1994. Dixie was with us through all of the changes that young adulthood brings. During grad school, she would sit under my drafting table until I'd stagger to bed at 4 am when a project was complete. When William was born, she'd sit at my feet during my endless hours in the rocking chair, listening to my secrets. Sometimes, if I felt alone, I would wrap my arms around her and tell her all my worries. She would rest her chin on my shoulder, and let me hug her.

Dixie had one weakness-- FOOD. She relished holidays, which always tested her food swiping skills. A black blur would go by and biscuits would be gone. One Christmas we couldn't figure out what kept happening to all the cashews. My sister must've put out ten pounds of nuts all over the house. Vann's mom, a perfect southern lady, had made a chess pie one Father's Day. When it was time for dessert, all we found was an empty pie plate on the floor, prompting some four-letter words in perfect southern lady fashion. At my best friend's birthday brunch, Dixie ate half a breakfast casserole, and a tray of chicken salad sandwiches. She would drive our baby sitters crazy by jumping on the table and eating William's lunch while Wyatt was being put down for a nap.

I called Vann. I called the vet. The arrangements were made. I held Dixie as she let out her final breath, her fur soaking up my tears.

A few hours later, after breaking the news to the kids, we were on our way to High Springs for state qualifiers. We couldn't get out of it, as we had committed to taking William's friend Gabriel with us. Knowing we wouldn't leave the track until very late that night, Vann decided to check into our hotel-- The Days Inn in Alachua. It looked pretty raunchy on the outside, but I had seen worse. We headed to the track without entering our room.

I went about my race-weekend duties, registering the boys, and helping Vann set out the canopy and chairs, all the while feeling numb and stupefied. I told anyone who would listen that my dog died today. I loved on every dog I saw.

Around 10 o'clock that night, we finally headed to our hotel. The room was, to me, uninhabitable. Vann pulled back the 1970s bedspread to reveal sheets that I couldn't imagine crawling into, much less allowing my offspring to do the same. We grabbed our bags and retreated. The boys and I waited in the truck while Vann went to negotiate the return of our money. According to Vann, an irritable Indian woman, shrouded in a cloud of curry, appeared from behind the counter. I watched from the safety of the truck as Vann argued with this woman about the condition of the room, threatening to contact the Better Business Bureau, etc. Finally she told Vann he could obtain a refund if HE went and made the bed that the covers were pulled back on. Well, the answer there was not no, but HELL NO. Vann emerged with our refund just in time to witness the inebriated, elderly cowboy that was urinating in front of our truck. This day had been way too much for me.

With two exhausted boys, and a wife on the edge, Vann pulled into the Econo Lodge. This lobby had the tolerable aroma of burnt coffee and stale pastries rather than curry, and our over priced room was clean. Vann knows my limits, and he knew my mind was gone. Lying on the bed, staring at the ceiling, I remember Vann saying, "boys, leave your mother alone."


I felt like a zombie the next two days, but was grateful for the distraction of watching the kids race. William had an incredible weekend, trading firsts with Joey Leto in both expert and cruiser. Wyatt was entered in the "turkey open", where all main makers would win a turkey. Wyatt didn't make his main, and was very disappointed until he discovered that the turkeys were frozen. He thought he was racing for a live turkey.

When the weekend was finally over, we went home to the faint smell of a dog who was no longer there.

Now we have Zoey. Her life revolves around William and Wyatt instead of Vann and me. She may not know my secrets, but she will know theirs, and that's the way it should be.

Dixie lies forever under an antique camellia, where in the spring, winter's pink blooms softly fall. 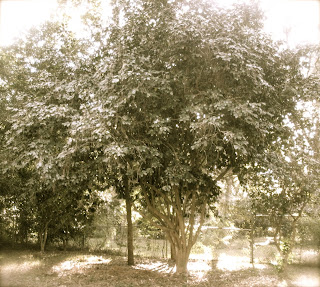