Beaten, Battered and Brokenhearted: Trials and Tribulations at the ABA Gator Nationals

The Parker Brothers made history in Oldsmar last weekend. For the first time ever, neither made the main. It took me a while to recall it, but it's been four years since William has missed a main. Believe me, it hit him like a ton of bricks.

Without elaborating, let's just say that on Saturday, William made some major errors that stopped him from transferring out of motos. Wyatt transferred after his first round, but was unable to clear his semi.

Embarrassed and heartbroken, William was determined Sunday to not only make the main, but place well. He cleared motos, and fought hard in his semi, only to get tangled up in a turn, taking two riders down with him.

He's feeling absolutely mortified, and ready to train harder. He's not willing to have another main-less weekend.

So how do we mend this brokenhearted BMXer? As a mom, it's a bit challenging. My reaction is to hug, kiss, and console, and tell him it was all ok. But, it wasn't ok. He underperformed and he knows it. Instead we helped him understand what went wrong, and discussed what he could've done differently. Then, of course, he received enough hugs and kisses to hopefully make it all better again. After all, he's disappointed enough for all of us.

On the ride home, William asked Wyatt, "Aren't you upset that you didn't make your main?" "Well", Wyatt said, "I would've liked to have made the main, but really I just want to have fun. I had a great weekend!"

In case you're wondering why this post is nearly a week overdue, yours truly has been down with what I can only describe as the Black Death. I'm quite certain I know where it came from... 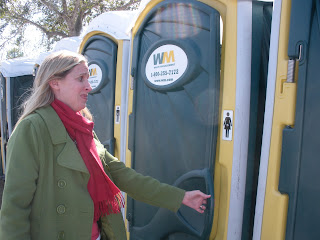 Next up- Peachtree City, where I for one hope the ladies room will be open.
BMX Mom
Posted by bmxmom at 1:52 PM