BMX Interrupted: Take me out to the ball game

It's tough being the younger sibling of an over achiever. I should know! When baseball season rolled around, and Wyatt expressed an interest in playing, I wondered how we would manage months of separate practices and games. With the help of fellow BMX mom and dear friend Dede Bryson, who organizes youth sports for Parks and Rec, we decided to age Wyatt up and put him on William's 9-10 team-- the Astros. I was worried though. I didn't want Wyatt to get discouraged during his first season of baseball, or feel out-shined by his brother-- again.

Practices began, and Wyatt's effort and enthusiasm were apparent. He ran the outfield like a jack rabbit, bounding after every ball whether it was hit to him or not. Although he seemed adept at fielding grounders,  fly balls were missed one after another. "He'll get it eventually." I heard the coach say. William, of course, caught many, and his strong arm threw easily to make a double play.

After several practices, Coach caught wind that Wyatt was only seven, and nick-named him "Little Man". While his strength wasn't that of his older teammates, he always hustled and listened intently, gaining more with each practice.

Last night the Astros had their season opener. Everyone had first game jitters, and the competition was tough. Wyatt sat the bench for the first inning, while he watched his brother run in a nice base hit. The game went on, and Wyatt was placed in center field. He saw little action, but remained alert. The game was close- too close. With bases loaded and two outs, we heard the loud crack! of the bat. It was an incredible hit, and time stood still as we watched it rocket towards center field where the Astros' "Little Man" raised his glove...  Then... "Little Man got it!! Little Man got it!!" The shouts from the coach brought cheers from the parents as the outfield ran in high-fiving their "Little Man". During the commotion, I caught William's eye. For a fleeting second it was there-- the look of pride that said, that's MY Bubba. 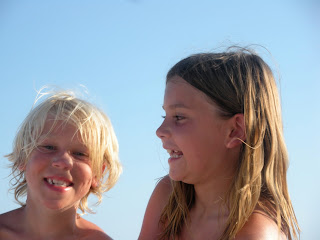