I've been beaming with pride ever since both boys made the main Sunday. For both of them to clear semis unscathed is nothing short of miraculous. William, after perfecting motos, took a spill in his main no more than 10 yards from the finish line. Nothing made me prouder than the way he quickly picked himself up and finished with dignity. He was disappointed, and we had to remind him that he had done what he wasn't supposed to or expected to do. Against doctor's orders, he had not only raced, but raced hard and made the main. 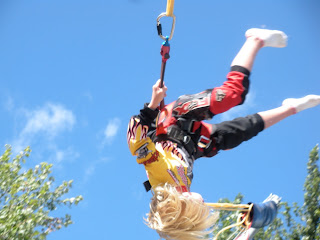 By the time Wyatt's 7 rookie main rolled around the dust was a heavy fog around the track, and I'm convinced I've contracted the black lung. Wyatt shot out like a cannon and took the lead. I used what remained of my dirt filled air supply to scream my head off. On the second straight, he slipped to second. He held onto second to the bitter end, where he was passed at the line. No matter. We were ecstatic with Wyatt's third place finish. I ran around to hug and congratulate him, and he was coughing dust and gasping for air. When he could finally speak, he asked, "Can I PLEASE go bungee jumping now?" He had waited all day.

Now it's time to air the dirty laundry, and I'm not referring to the dusty clothes in our suitcases. We heard many complaints from dedicated NBL families about how ill they were treated on Wednesday. I'd share our own personal experience, but I don't have time to attend anger management. Why, I ask, could we not set up canopies during Wednesday's clinic? Three hours of melting in the hot sun is no way to watch kids work their tails off. Open parking at noon Wednesday. Why the delay? We're all lined up anyway. Let us in! I have an idea-- How about we skip impromptu parking lot meetings concerning who goes in first. Come on, really? Lastly, if you have to repeatedly remind people that you are track president, you're probably not acting like one.

Fortunately, the good far outweighed the bad. The volunteers were A+. Not once did I wait in a long line. Everything appeared smooth and efficient. The new BMX Nation magazine was a big hit, and helped lend excitement to the NBL changes. The bright vertical sponsor banners were not only aesthetically pleasing, but safer than the former low banners. One big improvement was the new gate, which I heard no complaints about. Although long, the race was run at a timely pace despite the many accidents. Speaking of accidents, I'd like to give the most kudos to the EMTs who were responsive and thorough, making the event as safe as possible. 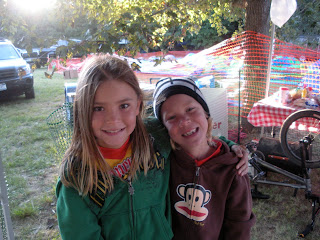 When we finally arrived at our hotel Sunday night, William plopped down on the couch. "I'm so glad that's over." "Why?" I asked. "The pressure. You just don't know, Mommy." I listened to my 9-year-old describe staging. How he tried to talk to his friend who was stoically holding back nervous tears, while the other 9 experts, jittery and agitated, chattered amongst themselves about nothing in particular. Some of them are pressured by their team-- We're counting on you! Many of them by parents-- If you would just guard your line! A few are grasping at something they can't bear to let go-- I can't lose this title! Most of all, they are pressured by each other. I watched William's 9x class closely. It's chock full of great kids and skilled riders, and I commend them. I commend all the riders. They showed that it takes not only strength and skill, but courage and character to race at the NBL Grand Nationals.

See you next year!