Disappointment, Relief, and the Reluctant Return of 502

"Excuse me sir, what did you break?" While waiting in Tallahassee Orthopedic Clinic yesterday, William struck up a conversation with a middle-aged man with a walker, and a fresh cast drying on his arm. "My wrist and my hip." He replied. William let out a sympathetic "Ooooooooooh. I fractured my wrist too. See? It wasn't bad. I didn't need a cast. I dislocated my elbow. That hurt a lot more. Is yours bad?" "Real bad." The man winced.

William went on to ask how?, and was impressed that it was a motorcycle accident. Then William's eyes lit with a flurry of questions: What kind of bike? Do you race? How did you fall? I would've stopped William, but he actually seemed to be making the man happy with his childhood curiosities. Due to his various mishaps, William has been a fairly regular patient at TOC for over three years, and he's a little too comfortable there.

After several days of physical therapy, we were feeling confident that William would race the Grands. As a matter of fact, we knew it. William's arm was x-rayed, and after careful examination and manipulation of his elbow, Dr. Fahey, who knows William well, heaved a sigh. "I can't let him do it. If he falls on it, it won't bend. It will break." We stood there disbelieving. William was confused. "So, you're not changing your mind? I can't race the Grands?" Dr. Fahey gave us the news that he was hopeful for October, but there was no way he would race next weekend.

We're all disappointed, William most of all. Still, he admitted feeling some relief. The pressure on him would've been tremendous, and he had concerns about racing without being 100%. I felt his relief too. With such tight competition in the 9x class, making the main would've been a major undertaking in his current condition. 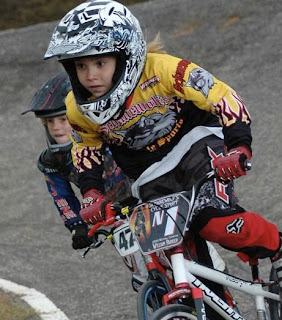 William's biggest disappointment was knowing that it's time to surrender his plate. Designed by Stuart Harrison of HRP Designs, William's #1 plate features a fiery graphic of Slash shredding on his guitar. Just above William's name are the words 2009 National Champion. It was a hard title to earn, and just as hard to give up without a fight.

All is not lost. One week from now, we'll be in Louisville, cheering on Wyatt, and celebrating with family and friends. For once, Wyatt will be out of the shadow. It'll be his time to shine.