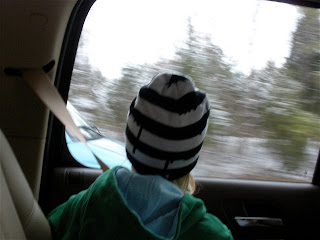 The excitement of Christmas quickly abated as we headed north early on December 26th to race the NBL Christmas Classic in Columbus, Ohio. Flurries began falling before we hit Atlanta, and the boys actually chose the scenery over movies and ipads. Just north of Knoxville, the weather turned into what any Floridian would certainly call a blizzard. In the midst of watching cars swerve off the road, and snow plows rumble by, my dad calls to ask if we've packed an emergency kit with flares and blankets. Um, no.


With darkness falling, and Vann growing more weary by the minute, the snow finally stopped, and the road cleared before we hit Ohio. "See?" I said. "Winter dreams do come true!" My nerdiness brought chuckles from the back seat. 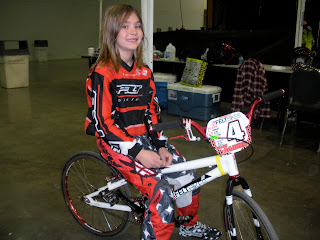 The next day we watched the President's Cup, and realized that with a 300+ moto count, we were going to have to extend our stay. William met his new team mates, and was so excited to get to know them. He was thrilled with his new gear, and it was like Christmas all over. 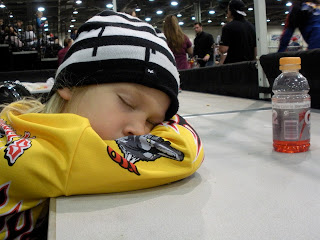 Thanks to Big Daddy, we were the first ones in the convention center on day 1 of the Christmas Classic. After a brief practice, Wyatt took a long nap, knowing it would be several hours before his first moto. He never seemed to fully awaken, and was unable to clear semis in his first novice (excuse me-- challenger) race.

William, however, was excited-- maybe too excited. In his first moto in 9 expert, he barely saved himself from flipping the gate, and did an interesting nose manual down the starting hill. He couldn't replicate it if he tried. Incredibly, he righted himself and raced on to take 3rd. After that, he had no trouble winning his remaining motos, and taking a 2nd in the main. There is definitely no shame in coming in second to DK rider Spencer Cole. That kid rides like greased lightening. William would love to come in ahead of him one day. The 9 cruiser class actually had semis, which is a first as far as I know. William perfected the day in cruiser, and felt confident for day 2.

Vann let the boys sleep in the next morning, knowing that they needed rest more than practice. Wyatt had a better look about him, and seemed ready to give it his all. He easily cleared motos taking a 3 and a 4. His semi brought tears to my eyes as I watched him qualify for his first challenger main with a 3rd place finish.
Winter dreams do come true.


William had gate trouble again in his 9 expert main. He rounded the first turn in 6th, and turned on the jets. He crossed the line in a close third, not willing to accept anything less than a podium finish. Cruiser class was a repeat of day one, with William taking another perfect.

That night, the boys blew off steam running around with friends, while we relaxed at the bar. As exhausting as it was, we agreed it was the best race event ever. The best part was adding new friends to our bmx family!

The next morning, William, pale from fatigue, looked sadly out our hotel window. "Everything ok?" I asked. Quietly he said, "I don't want to go. I had forgotten how much I love to race." A moment later came the question... "Can we go to Indy?"
Maybe... IF...
Winter dreams do come true.


From our family to yours, have a happy, healthy and prosperous new year!