If we are lucky, a person comes into our lives to guide and teach us. Not in the way of a parent, sibling or child, but someone more unexpected. Someone who's there because chance led them. If we are even luckier, we recognize that person, and know they are magic.

A good bit of my childhood summers were spent at my Papa's South Florida home. Everyday the pool water churned, full of my cousins - kids ranging in age from three to thirty-three. Rowdy as we were, it was easy for a small child to get left behind when the call rang out that it was time to dress for dinner. One particular day, after everyone had scattered to their showers, my Aunt Kathy returned to the pool, most likely to gather wet towels and empty soda cans. A shadow on the bottom caught her eye and she dove in without a thought. She dragged me up and brought me around. I don't remember this. I only have the story she told me, but surely this was when Aunt Kathy became my magic person.

During my teenaged years, Aunt Kathy, Uncle Lynn, and my cousins Jennifer and Chris would often visit my dad's house on the water in Ft. Walton Beach, where we would swim, tube and ski all day, and barbecue and play cards all night.

It was tradition in our family to participate in the annual Billy Bowlegs boat parade, but some years there were too many of us to fit on the boat, so Aunt Kathy and I would volunteer to stay behind. As the others, decked out in pirate attire, left on the boat to join the parade, we decided to take the long swim across the Sound to watch from a sandbar. To make our swim easier, we perched a box of wine atop a yellow raft, and carried it along with us. We laughed and squealed when something slimy brushed our legs, and struggled to keep our wine afloat in the wake of passing boats. We made it to the sandbar as the first pirate ships were passing. As their cannons blasted, we talked and laughed, and drank salt water tinged white zin from the box. My mom wouldn't of approved.

During that time of my life, as a wild teen who never quite lived up to expectations, I felt judged by most adults. But not by Aunt Kathy. She made me feel like I would be ok. That I was ok.

By observing my Aunt Kathy and Uncle Lynn, I learned that marriage could be happy. They spoke to one another with love and kindness. They never screamed, and were never condescending. If hurt or angry, they forgave, because no one is perfect. This was a lesson I couldn't find in my own home, and one I needed desperately.

When I did marry, Vann grew to love Aunt Kathy too, seeing her magic as I did. When Aunt Kathy and Uncle Lynn would visit, they'd bring us plants from their garden. We'd eat crabs, grill steaks, and play cards all night.

In the midst of my young marriage,  Aunt Kathy was diagnosed with ovarian cancer. At the time, I didn't think much about it. In our late 20s, busy having babies, we had other things to think about.

Life continued much as usual. Aunt Kathy and Uncle Lynn had their own grandchildren, and began new traditions, each year taking them to the mountains in the fall, and the beach in the summer. Aunt Kathy would occasionally fall ill, but always carried on. She enjoyed her job and her zumba class, doing everything in her power to keep going and stay healthy. She didn't want to miss a thing.

After I lost my mom, Aunt Kathy helped fill the hole in my heart. She and Uncle Lynn were always there for Vann and me, and our boys, loving them as their own. Their love and support was endless, and several times they travelled to watch the boys race. They joined us in Louisville for NBL Grands the year William won a title, their very presence calming our nerves and bringing us joy.

Last summer our families spent a wild week at the beach together, treasuring each moment of life. Aunt Kathy soaked up every laugh and every smile, with the people she loved. If she was in pain, she never once complained, as her young grandchildren climbed in her lap.

Even as her body began to fail, she never wanted to give up her fight. Last week, however, it all became too much. She told her family and friends goodbye, and made my uncle promise to continue the traditions they began. Last night, her pain ended, and she is at peace. When I spoke with Uncle Lynn he said, "don't forget me, I'm still here." How could I ever?

No one ever has shown me such strength and love. As her spirit flies away, her magic remains in my heart. 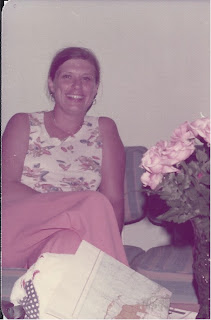