Lexington, SC boasts one of the best tracks in the the Southeast, and we had been looking forward to this event weekend for months. The Sox brothers didn't disappoint. The track was pristine, with a new pro-set that made for exciting elite mains. 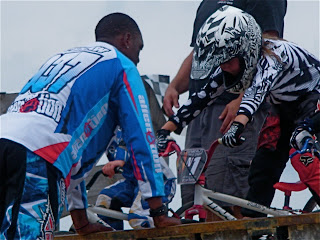 Weekend events kicked off on Friday with a skills clinic. The boys trained for three hours with pros Jeff Upshaw (shown with William), Chris Norberg, and head instructor Justin Travis. A special thanks to Chris, who rides on Schanewolf with the boys (more on teams in a future blog), for spending some extra time coaching William.


Racing kicked off Saturday. William's final race weekend as an 8-year-old proved to be no walk in the park. He's had stiff competition in both 8x and cruiser  from Zachary Von Bergen since they first met up at the Easter Classic last month. On Saturday, Zach put the hammer down on William in 8x, but William retaliated and took the win in cruiser. In spite of their fierce competitiveness, I watched these two fist-bump on the gate, and wish each other good luck. At the finish line, there were smiles and high-fives.


Wyatt was on fire Saturday, and pushed hard for a win. He didn't miss it by much, and we came away feeling pretty confident for Sunday's race.


After the boys finished their mains, the Stacy Mitchhart Band kept us entertained while we waited for elite racing action to begin. We were fortunate enough to have our good friends the Greens with us. Their son Grant, and William have been racing together since they were 5. While the adults enjoyed live music and cold libations, the very same boys who strategize against one another on the track ate cupcakes and hot dogs together, and had an unfair match up of big brothers against little brothers football on the adjacent soccer field. By the end of the afternoon, the boys were tired, happy, and covered with South Carolina dirt and Duncan Hines chocolate icing.


Don't think for a minute William wasn't disappointed by his loss in 8x. He played it over in his head and strategized like mad in preparation for Sunday. When morning rolled around though, the wins didn't come for him. He pulled seconds in both classes. Each race is a learning experience though, and he knows what he needs to do to prepare for next time.

Sunday's story was all about Wyatt. His day started out down-right crummy. Fortunately I was watching morning practice. Wyatt crashed hard enough to send me hurdling the fence like Jackie Joyner-Kersee. Mucho thanks to the random bmx dad who yelled "hold the gate!" and helped me drag Wyatt and his bike off the track before the gate dropped and released the stampede. After a hug and a kiss and a general once-over, he was back in the saddle again. 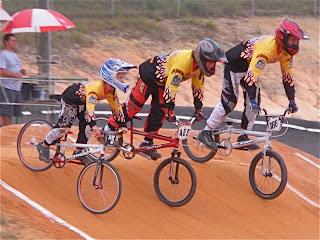 Our team, Schanewolf, came in 2nd overall on Saturday, and Wyatt was selected to ride in the Sunday morning parade lap (pictured right). Mr. Schanewolf has been applauding his efforts lately, and is anxious to try him on a team sheet after he earns his move-ups.
Wyatt's luck carried over into motos. In moto one, Wyatt came unclipped-- twice. He managed to get control though, and catch up to take third. Moto two was a close second. Before moto three, we told him he had it. He had won one moto the previous day, so we knew he had it in him. He shot out of the gate like a cannon, and took an early lead. No one was close. It was his. Then, he hit a jump wrong, and was down. We watched as the others passed him by. We watched him pick himself up and get on the bike. We watched him haul a** to catch the pack and still come in fifth. Truly, I had never seen anyone do that before. He came back smiling, covered in red clay from head to toe. Two people we didn't know complimented him on his tenacity. I bet you can't guess what happened in the main----
Yeah!! He WON!
BMX Mom
Posted by bmxmom at 10:08 AM