Had I known then what I know now, William would have started racing at age 3. For him, the bike is an appendage. Like an arm or a leg, he wouldn't be quite himself without it. It operates as a part of him rather than simply being operated by him. These are the things his dad and I have learned as we've watched his skills develop-- somewhat naturally. However, there were early signs.

William was a stoic baby. I would force the smiles out of him with all the gusto of Barney the Dinosaur.  I would cherish every brief smile and "heh heh heh" which would quickly dissipate into a judge-like demeanor. His happiness measured my success so to speak. 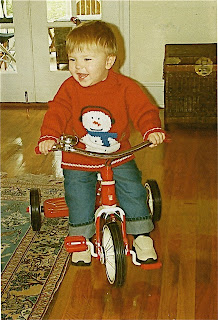 On Christmas morning 2002, a chubby, 18-month old William toddled out to discover what Santa had left him -- a radio flyer tricycle. Suddenly the days of stoicism came to a halt. The grins and laughter coming from that child brought tears to my eyes. Even with his sumo wrestler physique, he had no trouble operating the tiny trike, and could soon travel up and down the side walk.

During this time, another biker was developing. By February, I was hugely pregnant. Not due until mid-May, I began to dilate, and was put on "bed rest". What a joke. Anyone with a 1-yr-old knows that there is no such thing as "bed rest".  We did the best we could, but William was restless for his forays on the sidewalk with his trusty trike. Thinking I could easily keep up with what was basically an overgrown infant, I set out with William. Before I knew it, he revved up those legs and was halfway up the street. My hollering only seemed to fuel his engines. I had no choice but to grab my contracting belly and run after William, who was already torturing his unborn brother. 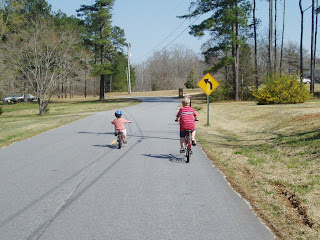 Christmas 2004, William received his first 2-wheeler with carefully applied training wheels. "I don't want those. Take them off." "You need them", I said. "No, I don't." The training wheels were removed, and William was rolled down the slight decline in our front yard-- at least 100 times. Less than a week later, he could only be separated from his Schwinn Stingray at mealtime. (Shown above, a 3-yr-old William riding with his older cousin Ryan.) 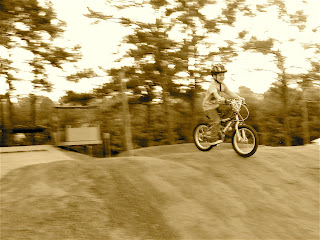 A year later, William was invited to the BMX track by his pre-school buddy Shelton, who was also proficient on two wheels. Something happened that day as I watched William fall, slide down jumps, and drag his bike back up with all his might. William found happiness. 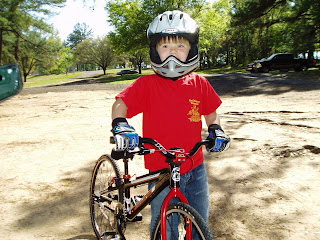 It was then I became a BMX Mom. Every Tuesday and Thursday William was faithfully at practice. Our then track director, David Shields, raved about William's ability to focus at such a young age. He convinced us to buy William's first racing bike, a Redline Proline mini. 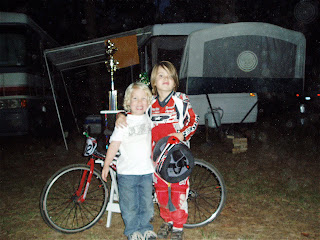 During the 2006 season, William raced 10 local races, just enough to qualify him to race in the Southeast Regional Championship. The race was held in Albany, GA, and combined with the Fall Classic nationals. We had no idea what to expect, or how he would fare. William's class, the 5 and under rookies, were out en masse. That Saturday, William faced qualifying motos, quarters and semis in both the national race and regional championship. William easily perfected both races, and suddenly we were introduced to the intricacies of move-ups and sandbagging. (Photo: William with his biggest supporter, brother Wyatt, after the races.)

That first event weekend in 2006 changed the course of our lives. Ever since, our weekends have been filled with training and events, and making new friends in the bmx community. William reflects regularly, "What if Shelton had never invited me to the track?" Funny thing is, we have no idea where Shelton is today. Wherever you are, Shelton, we thank you.