Delusions in My Head

"Mommy? Daddy? Am I dreaming? "Sleep? You won't sleep for 10 years, man!" Vann was on the phone with his buddy Mike, a new father for three days now. We were on our way to the Malabar Farm, home of 1940s author Louis Bromfield. The scenery was unimaginably beautiful, and I nudged Vann to slow down as gold finches darted in and out of our path from the wild flower edged cornfields.

Before touring the historic home, we decided to have a bite to eat at the Malabar Farm Restaurant. Louis Bromfield dreamed of having an authentic French restaurant on his property, and there it was-- a delight to the gastronomical senses in the middle of a cornfield. The menu was fabulous. But, I think any menu that offers a "plate of rare cheeses" is fabulous. With no kids, no work, and no problems, we decided to linger over a bottle of South African blended white and enjoy a cheese plate. The wine was perfect for a misty day, and I enjoyed showing off my cheese knowledge with our server. I had ordered a blue cheese burger with the works, accompanied by blue lyonnaise potatoes grown on Malabar Farm.

Vann's phone rang, and he stepped outside to take what I assumed was a business call. As the most beautiful burger in the world was placed in front of me, Vann appeared. "We have to go." 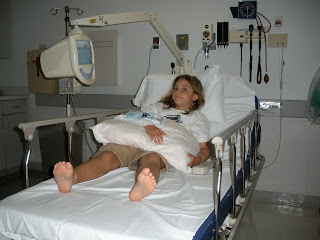 The call had been from Chris Ashcraft at Ohio Dreams. He was on the way to the Mansfield hospital with William. We abandoned our succulent morsels, plugged the hospital address into the Tom Tom, and did what we have done before-- raced to the hospital.

From William's pain level, I knew something was bad wrong. He was unable to move his right arm, and his elbow pad had to be cut off for his x-rays. When I finally saw it, I knew it was broken. It was the size of a baseball. As it happens, I was wrong.


"You should have seen me jump into the foam pit! I was awesome!"

We knew it. We had warned him. It was a classic case of I told you so. We refrained from saying that though, and listened to his stories of how high he had jumped, and how often. He and his buddy Dare had played rock-paper-scissors to see who would jump first. His injury didn't happen on his way into the foam pit, but on his way out. He slipped on the outside edge, and tumbled to the concrete below. Had he not been wearing his pads, I'm certain his elbow would have shattered.

His excruciating pain was caused from a dislocation, that had to be repaired. After a brief discussion with the doctor, William opted for anesthesia to have it popped back into place. I can't say I blame him. We were allowed to watch, as William's eyes fluttered and rolled in a drug induced stupor, and the doctor fixed his elbow within 3 seconds.

Lucy in the Sky With Diamonds hummed through my head as I watched William reach for reality. 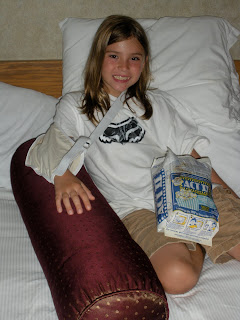 Reality came soon enough, and we went to collect William's belongings at camp, and ease the mind of his worried brother. William is staying with us tonight, being nursed and enjoying popcorn and a movie.

Because I'm aware that inquiring minds want to know... William is out for next weekend's race in Peachtree City. Now as for the Grands, we'll be consulting our orthopedist in Tallahassee first thing Monday morning. Don't count him out yet.

As for the other Parker brother, he's having the time of his life, and learning all the skills he needs to take to the upcoming events. Whether William rides or not, he'll be there rooting for Wyatt.