BMX racing does not begin on the track...

Something shifted in William today. His love for the bike outweighed his pain.

He and his brother have been on their bikes all day. Never mind that it's 100º. They started by building an obstacle course with logs. William would bunny hop over them, while Wyatt would attempt to pedal over without falling. Most of the time he fell, but that's just part of it.

Next came the race course. The brothers had an unfair battle in which Wyatt collapsed in a heap, and William kept on because it felt awesome just to ride.

Feeling emboldened, William decided his elbow was sturdy enough to do some jumping. A ramp was quickly engineered using old bricks and a couple of boards. The kids have done this a million times, and typically I turn a blind eye and hope for the best. 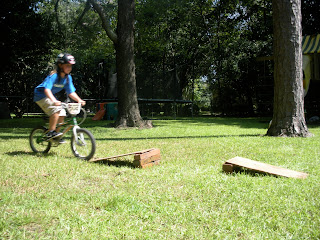 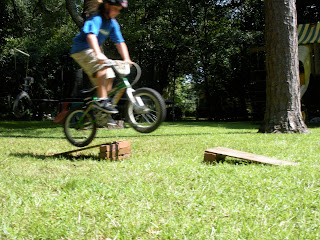 William hit down hard. "Oooowwww! My arm!!"
He shook it off, and next thing I know, two bricks are being added to the ramp. 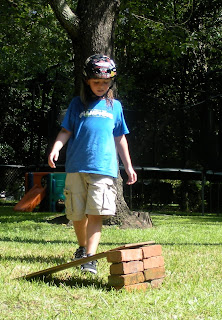 From the porch I hear Vann's voice, "That's not stable!" You see, today is our anniversary, and neither of us is in the mood for an emergency room visit.
We're in the mood for other things.
BMX Mom
Posted by bmxmom at 4:43 PM