A Wet Winning Weekend at the USA BMX Dixieland Nationals

The rain was falling Saturday morning as we huddled under the Felt tents.

"What are you doing?" Sam (Samantha) Brown glared at William as he was gearing up for practice. "You're just going to slip on the gate... and fall... and hurt yourself... or get muddy!"

His dad and I had been giving him the same speech for 30 minutes, but it took a pretty team mate to talk some sense into him. He stayed safe and clean by warming up in the parking lot.

By race time, the rain had ceased, and the sun had come out to dry the track. First rounds went well, with nearly the whole Felt crew, plus Wyatt and Charlie "Chooch" Christopher, transferring out.

Semis were thankfully uneventful. Everyone under the Felt tent easily moved on to their respective mains.

Racing in Georgia comes with the added bonus of family. My Georgia cousins came to watch the races and cheer on the boys. With the boys transferring out first round, there was a lot of time to hang out and visit in the pits, and discuss all of the fishing, baseball, boogie boarding, etc. that's going to take place on our upcoming family beach vacation.

As we stood on the fence waiting for Wyatt's 9 intermediate main, a screaming parent startled my cousin Judy's 7-month old daughter who had been sleeping peacefully in her sling. Judy leaned in to me and asked, "Do you guys yell like that?" Vann laughed. "Heather used to!" I then explained that I am now well under control, and proved it by standing demurely at the fence as Wyatt finished 5th in his first main as a 9-year-old.

Not long after, William was on the hill for 10x. He shot out of gate 4, and never looked back.

Wyatt covered his ears and crept away. Vann, in between his own shouts of "Stay on the cranks!" and "Close the door!" urged me to calm down. There was no calming me. I was a BMX mom possessed.

I screamed my head off as William brought in his first USA BMX national win.

I quickly turned my attention to William's friends racing 11x. As Joey Leto took the lead, I continued to cheer. Joey crossed the line for a win just as William approached me at the fence. A smile lit his face like sunshine and warmed my heart.

He rode off to congratulate Joey, whose smile was the size of William's. As the boys exchanged accolades, I heard William say, "that was just the confidence boost I needed".

Indeed it was. With Sunday's race cancelled due to weather, we left Atlanta on a high note.

I won, I heard William say to himself in the car. I WON. 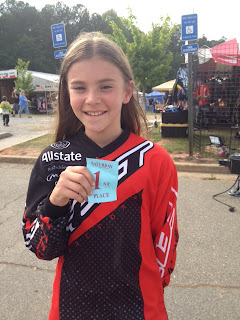 Look out England, here we come!