Sometimes They Fall: A Story of Courage (Part I)

April 24, 2007 was the last Tuesday in April. I know this because my book club meets the last Tuesday of every month. It was going to be a big night at the track. The weather was beautiful and the track was pristine. The BMX dads had a fish fry planned. I opted out, choosing instead to discuss Out of the Flames with my book club ladies. Not that I had much to say about the Restoration and Holy Trinity. And so, Vann (BMX dad) took the boys to practice.

My phone started ringing during our heated discussion of Michael Servetus, and his gory demise at the stake. I'm never interrupted at book club. I answered. The voice on the line was forcibly calm, hiding panic. "William is hurt. I need you to come to the track now."  I began spewing questions, but the only response was, "Get here NOW."

I left abruptly, trying to control my speed, all the while wondering why on earth I wasn't meeting them at the emergency room that I was driving past. The drive seemed too long. I hurried. The phone rang. Hurry. Hurry.


I saw the ambulance first.

After a full night of practice, followed by a race, the kids ate dinner and continued to ride. It was almost time to leave when William was hit. The other rider didn't see him. I was told that William cried out and went silent. When they tried to lift him, his left femur folded, and the ambulance was called.

William was sprawled on the track, the color gone from his face. He wasn't crying. He was loaded into the ambulance with me beside him. He was immediately stuck with an IV and given the maximum dose of morphine a 55 Ib body can take. The pulse in his left foot was checked repeatedly for signs of a severed femoral artery. We looked like a parade arriving at the hospital, with everyone from the track following behind the ambulance.

"Only three visitors allowed", we were told, as all but Vann, Wyatt and I dispersed. William's pants had to be removed for the x-ray. When the technician began cutting his pants, William began to cry. "I know it hurts baby", I soothed. "My new pants!" He sobbed. They were brand new red Fox racing pants. Then he turned to me quietly and asked, "Mommy, will you please get me some boxers in case this ever happens again?" Apparently he picked the wrong night to wear his Darth Vader drawers. 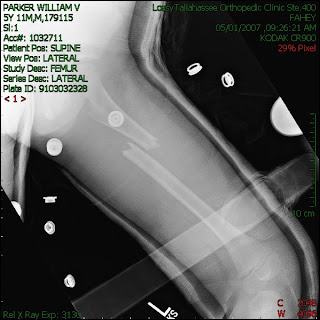 Watching William's face during his x-ray was torture, and I wanted to borrow his morphine drip just to get through it. The technician summoned us to the screen. It didn't require a phd to see that William's left femur, the largest bone in his little body, had snapped like a twig. In my nauseated stupor, I asked, "Is it broken?" (The image shown is a week after the accident. It's probably a good thing that I couldn't locate the emergency room x-rays.)

We were informed that the pediatric orthopedic surgeon had been called, and was on the way. When he arrived, he quickly explained that William would be prepped for surgery, and surgery would be performed immediately if the bone could not be set externally.  It was past 11:00, and Wyatt was asleep in a chair. Vann needed to get him home, and was forced to leave with all the uncertainty looming. Soon after, I was introduced to the team of surgeons, orthopedists, nurses and anesthesiologists who had been assembled to put our son back together. When it was time, I kissed William, and held his hand for as long as they would let me, as they wheeled the gurney to the O. R.

William has been the cause of the longest hours of my life: first, his laborious natural birth, then, this. Time stood still as I fidgeted restlessly and made necessary phone calls.

After three hours, William's chief orthopedist, Dr. Fahey, materialized in the waiting room. The cast application had been successful, and the bone had been set externally. William had been placed in a spica, which you really have to see to believe. I was led to recovery, where William was just waking up. He looked down. "Oh God", he muttered softly. I held his hand again as we were checked into our room. Drowsy from morphine and anesthesia, I thought William would sleep. Instead, he cried softly the rest of the night. I cried too, because I didn't know how to help my son.