Sometimes They Fall: A Story of Courage (Part II)

I must begin by giving credit to some special people who helped us through this crazy time. I am personally grateful for the gorgeous ladies of book club for their weeks of meals they so graciously delivered to my family. Many thanks to Vann's coworkers at Pella for all of their gifts and cards that made William smile. I know William is most grateful for the time he got to spend with Ricky Carmichael. He'll always be the G.O.A.T. to us. We would also like to thank Dr. Mark Fahey at Tallahassee Orthopedic Clinic. And last, a special thanks to my Grandma Helen who shouted words of wisdom from the great beyond.

If you have not had the opportunity to read Part I of this story, do so now.

After, well, the worst night of our lives, William finally slept. Visitors and nurses came and went. Vann arrived after taking Wyatt to preschool, and we were informed that William would be discharged that afternoon. We were scared, but relieved that he would be home with us. Vann sent me home at last to shower and try to gather myself before collecting Wyatt. My friend Dede had parked my car in the emergency lot the night before, which costs a measly dollar to exit. This is a real problem if you don't have a measly dollar on your person. Oh, I could've scrounged change, but this machine required a measly crisp dollar. Great. I had bigger things on my mind, so I cleverly positioned myself to steal out of there on the bumper of the next car that exited. My plan worked, so remember that the next time you're trapped in an emergency room parking lot.

My phone was ringing when I arrived home, and it was Kim from my book club. "What happened? How's William?" I'm sure she wasn't expecting the earful that she got.  Then she asked,  "how are YOU?" I looked down at myself, in the same clothes from yesterday, now dirty and smelly from the bmx track and the long night in the hospital, and all I could do was blink away tears. "Oh, I'm fine." Right. I'm really glad she didn't fall for that one, because she immediately gathered the troops and lined up our dinners for the following three weeks. If you don't go to church, I highly recommend joining a book club.

Vann arrived home with William a few hours later. We were given no instructions on how to care for him. We had no clue how to carry him, put him in the car, or wash his hair. Leaving the hospital, Vann was given no assistance putting him in the truck, while poor William was crying in pain. The nurses in the hospital looked at William as if he were an alien, and it had taken three of them to figure out the best way for him to go to the bathroom. How were we supposed to do all this at home? 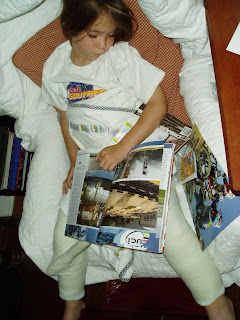 The first week was terribly difficult, as William was still in a tremendous amount of pain. Vann and I took turns sleeping in Wyatt's bed to be near William, and Wyatt would bunk up with one of us. William had always slept on his belly, but now had to sleep propped up on pillows, with more pillows positioned under his knees. Full of pain and frustration, he didn't sleep much.

William spent his days in a chair in our living room where he was most comfortable. He would doze off while reading BMX Today or BMXer, dreaming of getting back on his bike. It didn't take long for overwhelming boredom to set in. The following Tuesday, William announced that he wanted to watch bmx practice. On that first night back at the track, I think everyone wondered if he would in fact return to the bike. Our big burly track director, David Shields, held back tears, and had to turn away so William wouldn't see. What no one seemed to realize was that the thought of not returning to bmx never entered William's mind.

Three days after the accident, William's kindergarten teacher, Ms. Kenton, came to visit. William still had one month of school, and we weren't about to let this hold him back. She convinced William of how much the class missed him, and that he should come back when he felt up to it. We still needed to solve the issue of William's drafty aft, when Vann's ingenuity came into play. My clever husband bought William oversized shorts, removed the seams, and attached snaps so that poor William could cover himself. And so, we made arrangements for Wyatt to go to preschool five days a week, and I accompanied William to kindergarten for the remaining month of school. I'll admit, sitting in the cafeteria day after day with a bunch of kindergartners who couldn't open their milk cartons was a little trying, but I was so happy that William could still participate. His classmates were wonderful, and would take turns throwing the ball with him at recess.

Still, William suffered continuously from the frustration of being immobile. His dad, brother and I were constant cheerleaders trying to lift his spirits. After a couple of weeks, I was beginning to feel quite sorry for myself. Having William in that body cast was like having a 60 Ib baby that could bark out orders. My back ached from lifting him and his equally heavy wheel chair. My mind was numb from attending kindergarten. I was pathetic.

One particularly rough day, I dropped into bed exhausted, questioning again how we were going to get through this. Now, you may or may not believe me, but my dead grandma has a weird way of popping up when I least expect it. That night, her voice loud and clear in my head said these words:


You can not change what has happened.
You can decide whether to be weak or strong, or negative or positive.
I sat straight up in bed and wanted to slap myself for being so ridiculous. I vowed right then to end the pity party.
On Mother's Day, William received the best surprise. We were invited to watch Ricky Carmichael practice on his local track. Ricky and his buddy Ben Townley jumped high and did tail whips, and generally did a marvelous job of showing off. William loved it. Best of all, Ricky was the first to sign William's cast. We still have it, and it looks like a strange, headless body. 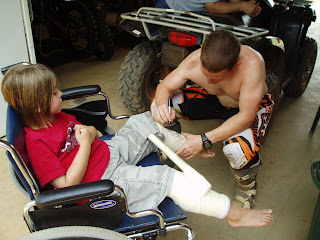 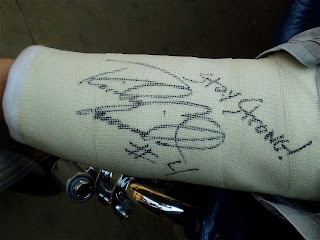 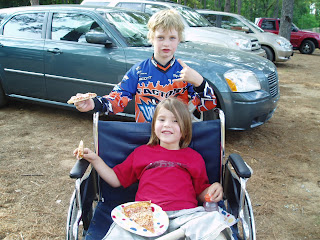 William's 6th birthday rolled around, and he chose to celebrate at the track. Originally, we had made plans to surprise William with a trip to Disney World. Just so you know, even if your child has a major accident and is in a body cast, that stupid mouse will not refund your deposit. We made the most of it just the same, and had a good night at the track. The boys pushed William around, and threw the football with him. (Pictured: William with his friend Keagan.) 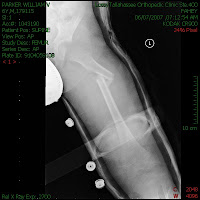 Time dragged on, and after seven weeks the big day for cast removal finally arrived. William couldn't wait to ride a bike, and I couldn't wait for him to take a bath. We quickly learned that things don't always go as planned. William's leg was healing at an angle, and we held our breaths as Dr. Fahey debated surgery once again.  Because William was growing so fast, he gambled, betting that William's growth would ultimately correct the problem. The decision was made to remove the spica and put William in a long leg cast.

William was glad to have one leg free, and quickly became somewhat mobile again with the help of a walker. He would practice in the yard where it was safe for him to fall over. I taught him the classic phrase, "I've fallen and I can't get up!" Being able to move around a bit helped ease the disappointment of still being in a cast. 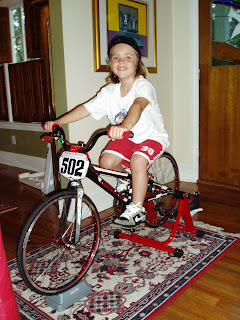 Three weeks later, we had better luck. The bone, although crooked, had fused well, and William was free at last. It would still be several weeks before William was allowed on a bike, but the day the cast came off, I let him ride his brother's big wheel. I had to carry him on and off of it because he still couldn't walk, but he could ride that big wheel like a champ. It wasn't long before he could begin using his trainer. This helped to strengthen his legs before he actually started riding.
When the day came for him to return to the track, everyone paused and watched as William, limping severely, but fearless, walked up the starting hill,
and rode again. 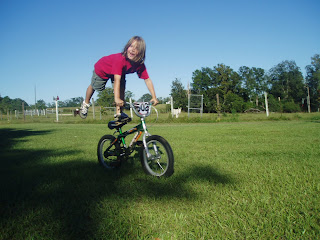