The Rookie: A prelude to what comes next

"Somewhere, a child surprises himself with his endurance, his quick mind, his dexterous hands. Somewhere a child accomplishes with ease that which usually takes great effort. And this child, who has been blind to his past but whose heart still beats for the thrill of the race, this child's soul awakens."*


This post is simply to provide my loyal readers (Hello? Anyone?) a little history before I launch into my next rambling--- which is a doozy.

The Winter of 2007 brought amazing things for William. After his wins at the 2006 Fall Classic and regional championship, we knew without a doubt that he would pursue racing with all of his 5-year-old gusto. We were advised by friends to hold him back and let him have a shot at the 6 rookie title (see sandbagging), but that wasn't going to happen. William wanted to race, and he wanted to WIN. 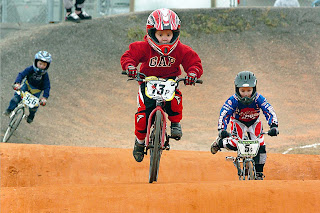 Our next event weekend was the 2007 state qualifier and SE regional at the Emerald Coast Dirt & Vert in Fort Walton Beach, FL. William perfected both days, and inched even closer to the novice class. (Pictured: William racing his buddy Grant. They now race each other in the 9 expert class. Photo credit: Devon Ravine.) 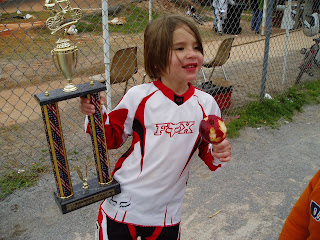 William's final race as a rookie was a few weeks later at regionals in Dothan, AL. Once again, he perfected the weekend, giving him the  move-up points he needed to enter the novice class.

After the Gator Nationals in Sarasota, and the Easter Classic in Orlando, William was poised to vie for the 6 novice national title.

From his 5-year-old vantage point, in the Spring of 2007, he was sitting on top of the world.

*From The Art of Racing in the Rain, by Garth Stein.
Posted by bmxmom at 9:41 AM